Home  |  Gowerton rugby girls get off to a flyer.

Gowerton rugby girls get off to a flyer. 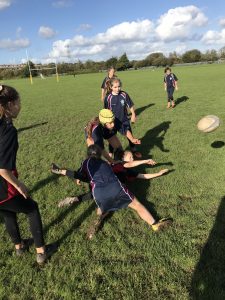 The Gowerton Girls team proved to be too strong for close neighbours Pontarddulais when they hosted them in their first meet of the season.

Both teams fielded players who were experiencing their first full 15 a side game. Lucy Morgan was one of those and proved to be a star player for the visitors with the year 7 pupil running strongly into contact and gaining excellent territory for her side.

Gowerton however had a few first timers of their own with Jemimah Brown, Lucy Lewis-Hopkins, Poppy Otterson and Jessica Parker all impressing playing their first game on a full size pitch.

Gowerton took the lead when excellent handling moved the ball to wing Alana Parez who sprinted along the touch line, she was held up just short of the line but offloaded to Keira Miller who was supporting on her inside and scored beneath the posts. Keira also added the extras.

The hosts continued to work well with ball in hand, severely testing the visitors’ defence. Millie Carey was the stand out visiting defender making a number of hard hitting tackles that stopped Gowerton in their tracks.

However Gowerton’s persistence paid off when the impressive running lines from Katie Richards, Caitlin Price, Nicole Mort and birthday girl Isobel Baldwin-Prichard resulted in the latter crossing for a try she converted herself. At the break Gowerton led 14-0. 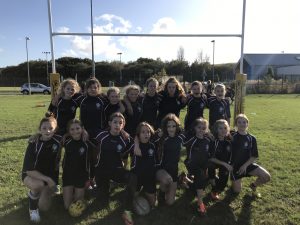 The Gowerton under 13 squad.

Early in the second period Pontarddulais enjoyed a greater share of possession with Gabby Kitching and Brooke Clift both carrying well into contact and supplying their side with good quality quick ball. As a result, Lila Hemmingway impressed with the ball and went on several darting midfield runs. 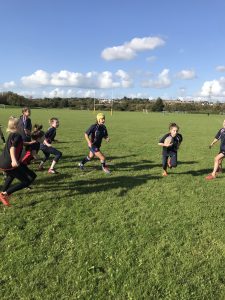 Gowerton’s Jessica Parker on the attack.

However, Gowerton’s defence was unflinching with Faith Gilmour, Grace Cope and Eva Lord all standing out to stop the visitors crossing their line.

The final quarter saw the game open up and Gowerton took advantage of the space with Eve Bessent, Carys Hennessy and Sophie James all crossing the line to close the game out. Two of the three tries were converted resulting in a final score line of 33-0 in favour of the hosts.

Gowerton will be looking to build on their impressive performance in fixtures after the half term break.