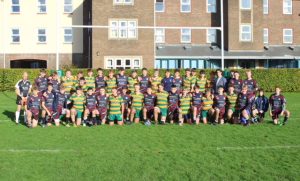 Gowerton travelled to Brecon to play their annual Memorial game in memory of their much respected former Head of PE Robert Evans.

The game, the 7th in memory of the former teacher, is normally played at Gowerton RFC but a late problem for Christ College meant they were unable to make the journey and after discussion of the possible alternatives with Rob’s widow Pam it was decided that Rob would have very much valued the opportunity for the Gowerton students to travel and play at the historic school.
Of the six previous matches, honours were even with three wins apiece, but with Gowerton having won the last two matches they travelled determined to make it three in a row.

Gowerton kicked off and although the hosts’ bulkier pack had a physical advantage it was Gowerton who applied most of the early pressure with scrum half Alex Graham-Woollard’s excellent service giving fly half Paul Packham the opportunity to control territory. 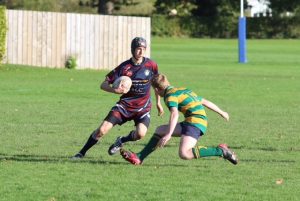 Gowerton fly half Paul Packham who scored all 13 of his team’s points.

With Gowerton spending much of the first quarter in the hosts 22, Christ College conceded several penalties around the contact area. Gowerton ambitiously turned down the opportunity to kick at goal and opted to tap and go. In the 8th minute it appeared that they would be rewarded when wing Caradog Kaniewski appeared to slide in at the corner. However, the referee was unsighted and awarded a 5 metre scrum.

Despite the sound work of front row forwards Jacob Purcell, Rhys Flower and Peter Legg-Davies who all carried strongly and protected the ball well in contact, Gowerton were unable to breach the hosts’ defence and when they were awarded another penalty in the 17th minute, fly half Packham gave his side the lead with a kick from 15 metres. 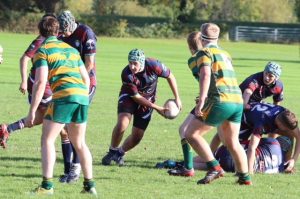 Gowerton hooker and man of the match Rhys Flower looks for a gap.

The hosts had had to play second fiddle for most of the first quarter, but they were in the lead almost straight from the restart. They re-gathered their kick off and moved the ball swiftly, flanker Rhodri Jenkins was on the end of the move and scored a try that fly half Kitt Stephens converted.

Unfortunately for Gowerton, scrum half Graham-Woollard badly broke his wrist during the move and had to be replaced by Sam Wells.

The visitors continued to have the better of territory with lock Ollie Freeman and No.8 and captain Sam Terry both tackling tenaciously and their pressure eventually paid dividends in the 28th minute when they ran another kickable penalty and following good carries by props Purcell and Legg-Davies and lock Ryan Stagg, fly half Packham spotted a gap and sliced through for a try he converted himself.

Christ College again responded immediately and in the final minute of the half regained the lead when No.8 Sion Coyle picked up from the base of a 5 metre scrum, brushed aside a would be tackler to cross for a try that gave the home side a 12-10 advantage at the break.

The second half was evenly contested with centre Zac Johns, flanker Robyn Williams, No. 8 Terry and hooker and man of the match Flower all carrying well, but the hosts defence continued to be difficult to breach. Gowerton took the lead as the game entered the final quarter when the hosts conceded another penalty at the breakdown and fly half Packham dissected the posts from 30 metres. 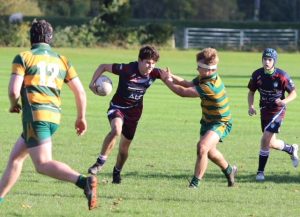 Gowerton looked like they would stay in front until the final whistle, however, with four minutes left they lost possession inside the Christ College half, the hosts reacted quickly and No.8 Coyle showed an excellent turn of pace to sprint 60 metres for a try that fly half Stephens converted.

Gowerton pressed for a winning score in the final minutes but the Christ College defence refused to yield and at the final whistle they had a hard earned, but well deserved victory from a game that was hard fought but fairly contested in a manner that would have pleased the man whose life the game was celebrating.