Gowerton’s year 8 team entertained Olchfa in the third place play off of the Ospreys West Cup. With the hosts having no pitch available to them they were grateful to Waunarlwydd RFC who offered their excellent facilities at the last minute.

Gowerton applied the early pressure with the work of the front row of Harvey Marshall, Nathan Gardiner and Josh Anderson giving them an advantage in the scrum.

The hosts opened the scoring in the 6th minute when impressive work from forwards James Wells and Jack Lewis-Colwill gave the backs quick ball, fly half Cameron Bevan attacked the line and although he was tackled just short his fantastic offload found centre Ethan Davies who dotted down to give his side the lead. 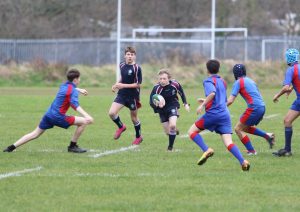 The visitors now dominated the rest of the half with centre Jack Hoskins running well and strong in the contact area and captain and No.8 Harry Jones a fantastic leader both in defence and attack.

Olchfa looked certain to equalise in the 13th minute and centre Hoskins was only denied by a great cover tackle by wing Drew Dodd. However, the respite was short lived and two minutes later Hoskins got his just rewards when he crossed to tie the scores.

Buoyed by this score the visitors pressed for the lead and initially were only denied a second score by the great defensive work of full back Lewis Hopkins. Inevitably their pressure told and with captain Jones the dominant player during this period they took the lead with a good team effort that ended when Cobban Nash-Eames crossed to give his side a 10-5 advantage at the interval.

Gowerton appeared rejuvenated after the break lock Richard Davies and No.8 Lewis-Colwill and prop and player of the match Marshall all carried strongly consistently breaking the gain line, while flanker James Wells was the key player at the break down winning a number of significant turnovers.

The hosts were back on level terms when a great run by prop Josh Anderson took him deep into the visitors’ 22 and when the ball was released from the ruck scrum half Iwan Pearce-Morgan fed lock Finn Lewis whose drove over to tie the scores. 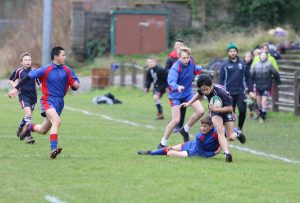 Now on the front foot Gowerton regained the lead when strong running from prop Marshall and No.8 Lewis Colwill again gave their backs quick ball, crisp handling and a break by centre Ethan Davies released wing Dodd who dived over in the corner. 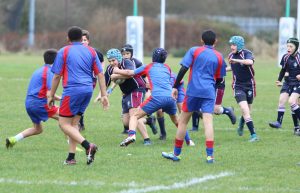 Gowerton sealed victory when a carefully judged kick ahead by centre Tyler Davies proved too difficult for the visitors defence to deal with and centre Ethan Davies pounced to gather and cross for a try that scrum half Pearce-Morgan converted leaving the hosts victors 22-10. 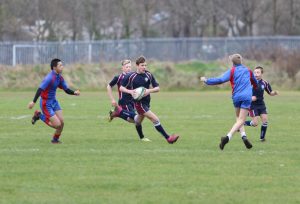 Gowerton have received news of their draw for the round of 32 of the Welsh Cup and they travel to play Ospreys East champions Coleg Cymunedol y Dderwen in January.

With Gowerton’s 1st XV having completed their Ospreys Division 1 fixtures their year 11 team were able to take on Bishopston in a friendly, the game was due to be played in Gowerton, but with no pitch available for the school they were forced to travel to Bishopston.

The hosts produced an impressive display of attacking rugby that eventually saw them crossing for five unanswered tries to see them earn a well-deserved victory.

The first quarter was a cagey affair that saw Bishopston retaining the ball well but struggling to breakdown a strong and committed Gowerton defence led by some excellent tackles by flanker Vikran Sanghera and centre Joe Hawkins-Cole.

Inevitably their huge defensive effort saw them tire as the half progressed and as half time approached two quick scores from James Boski and Louis Lauder both converted by Morgan John-Rees meant the hosts turned around with a 14 point advantage.

Bishopston started the second period as they had finished the first with some brilliant attacking play but again Gowerton’s strong defensive effort initially held them at bay. However, when the game entered the final quarter pacey wing Charlie Holland crossed three times and with John-Rees converting all three they ended convincing winners 35-0.