Gowerton come out on top against neighbours. 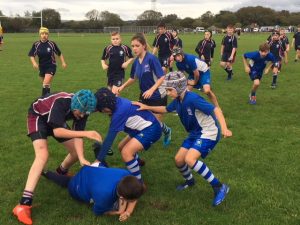 Gowerton’s year 8 rugby team hosted neighbours Penyrheol for their second Ospreys West group match in the Welsh Schools’ Cup. The two teams had experienced differing fortunes in their first games with Gowerton losing narrowly to Ystalyfera whilst the visitors had come out on top against Morriston.

The visitors kicked off and were immediately on the front foot only being denied an early score by the hard work of flanker Jacob Garlick and half backs Ben Hughes and Cameron Bevan.

With locks Isobel Baldwin-Pritchard and Richard Davies and No.8 Jack Lewis-Colwill all carrying strongly, Gowerton applied pressure themselves and in the 7th minute they opened the scoring when No.8 Lewis-Colwill powered his way over the whitewash for a try that centre Ethan Davies converted.

Gowerton were now in the ascendency and were on the top for much of the rest of the half. They crossed for a second try in the 14th minute when good work by lock Davies, prop Harvey Marshall and hooker Nathan Gardiner freed centre Ethan Davies and he outstripped the cover to score.

With the hosts now dominating territory and possession they were only stopped from increasing their lead by the excellent defensive work of full back Josh Pennino, centre Sam Seager and No.8 Dylan Williams. However, on the stroke of half time the hosts’ pressure eventually bore fruit and an elusive side-stepping run by fly half Cameron Bevan allowed him to claim his side’s third try and they led 17-0 at the break.

The second period was evenly contested and play see-sawed from end to end with each team scoring three tries. Gowerton stretched their lead when centre Tyler Davies had the pace to sprint clear from 30 metres.

The visitors responded with half backs Jonny Davies and George Davies probing for gaps and quick thinking by scrum half Jonny saw him react quickly and dot down for a try he converted himself.

Gowerton were back on the front foot when centre Tyler Davies again burst clear and crossed for his second try. Ethan Davies added the extras. 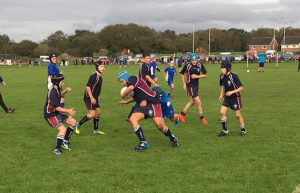 Penyrheol refused to wilt and with outstanding lock Layla Kerr working tirelessly and No.8 Williams carrying strongly they scored their second try when hooker Reuben Hall burrowed over from short range. Back came Gowerton and with flanker and player of the match James Wells dominating the breakdown they added a sixth score when Wells secured a turnover which allowed fly half Bevan to set off on another elusive run which saw him score beneath the sticks and centre Ethan Davies again added the extras.

The final say, rightly went to the visitors, when prop Scott Morris went on a powerful run that allowed him to burst through several tackles and score in the corner.

The final whistle followed soon afterwards and Gowerton had achieved a win that their strong first half performance merited. 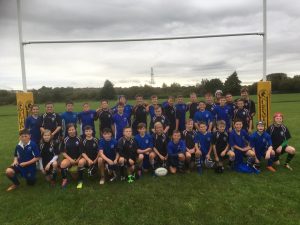 The Gowerton and Penyrheol year 8 teams after their match.

Defences’ dominate but Morriston come out on top.

Gowerton’s year 9 rugby team hosted Morriston for their third Ospreys West group match in the Welsh Schools’ Cup. The hosts’ confidence had been boosted after last week’s win at Bishop Gore. However, it was the visitors, with the advantage of the gusting wind at their backs who dominated the early stages with No.8 Connor Dougal and centres Ryan Reynolds and Jacob Joseph all carrying strongly. With fly half Noah Russell controlling play intelligently they deservedly took the lead in the 4th minute when good midfield handling allowed wing Logan Black the space to score in the corner.
The visitors continued to dominate field position and Gowerton’s defence was severely tested, however, with the back row of Sam John, Harvey Thomas and Finn Sutton along with centre Rowan Lewis and full back Charlie Steadman all defending stoically they were initially able to repel their attacks.
Gowerton had their own threats with No. 8 Sutton and centre Lewis Holloway both able to regularly make advances into Morriston’s defence as a result of their powerful carrying. In the 20th minute Morriston stretched their lead when a powerful counter ruck allowed Steffan Harry to secure possession, a midfield break by fly half Russell breached Gowerton’s defence and he fed centre Reynolds who fended off two would be tacklers to dot down beneath the sticks for a try that fly half Russell converted.
Gowerton now enjoyed their best spell of the game and a crunching tackle by full back Steadman resulted in the hosts turning over possession on halfway, centre Holloway drove into the visitors’ 22, centre Tyler Cooper chipped ahead and Morriston were forced to concede a 5 metre scrum. No.8 Sutton picked up from the base and drove over to open the hosts’ account. The half time whistle followed and with the advantage of the elements in the second period Gowerton were confident that they could turn the match around.
The second period was scoreless with the visitors’ defence proving impenetrable and Gowerton unable to build consistent pressure with a lack of discipline meaning they conceded a series of penalties.