Year 9 come out on top but 1st XV lose in high scoring fixtures. 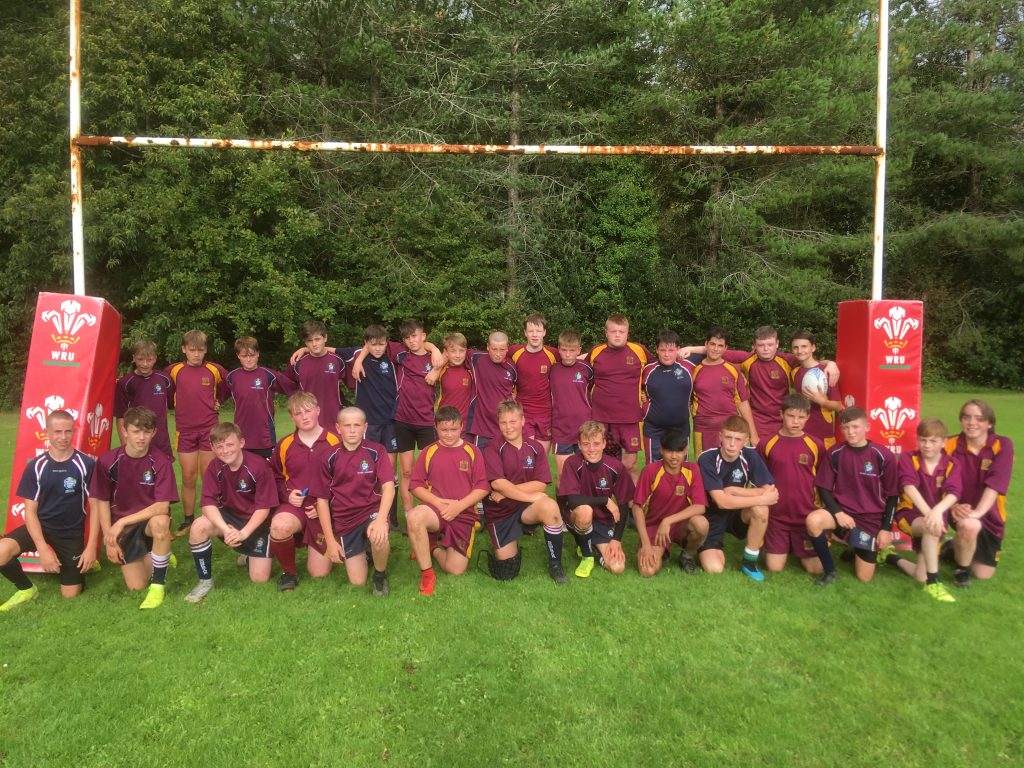 The Gowerton and Bishop Gore year 9 squads after their close encounter.

The Gowerton year 9 rugby team were due to host Bishop Gore for their second Ospreys Cup group fixture, but with the Elba field being unfit following the heavy rain of the previous few days the fixture was switched to Bishop Gore’s field at Sketty Lane. Underfoot conditions there were ideal for a game of open running rugby and the two sides didn’t disappoint, producing a 57 point thriller with the sides only separated by a single point at the final whistle.
Gowerton got off to a flyer when a strong carry from the kick off by hooker Ellis Williams took him beyond halfway and when he presented quick ball, scrum half Will Price was able to feed flanker Sam John whose excellent angled run saw him slice through the defence and sprint clear to score a try that wing Elliot Chislett converted.
The hosts weren’t going to allow this set back to restrict them and they dominated the next 10 minutes with flanker Callum Richter-John impressing with his aggressive ball carrying. Bishop Gore levelled the scores in the 5th minute when a clever kick ahead by fly half Lewis Evans found space behind the visitors’ defence and centre Christian Stones won the chase to touchdown. Fly half Evans added the extras.
Bishop Gore were in front 7 minutes later when captain and No.8 Billy-Jay Leyshon powered over from short range with Evans again on target from the tee.
The visitors always carried a threat with their outside backs and with locks Tristan John and Ryan Short carrying tirelessly, half backs Price and fly half Charlie Steadman were able to release them regularly. A pacey run by wing Chislett took Gowerton deep into the Bishop Gore half and strong carries by No.8 Finn Sutton and hooker Williams gave flanker John the chance to grab a second score, he did so, and centre Tyler Cooper’s conversion brought the teams level.
On the stroke of half time Gowerton were back in front when a burst from centre Cooper looked certain to result in a try in the corner only for him to be denied by a great cover tackle by flanker Kobir Hussain. However, from the lineout it was impressive flanker John who completed his hat trick giving his side a 19-14 advantage at the break.
Gowerton stretched their lead early in the second period when full back Matthew Pewsey gathered a clearance kick in his own half and set off on a counter attack, the accurate passing of centre Rowan Lewis and scrum half Jayden Grey gave No.8 Sutton the space to burst clear and he scored out wide.
The hosts continued to work hard and a lack of discipline led to Gowerton conceding several penalties. When the final one was tapped quickly, captain Leyshon powered over from short range. The conversion by fly half Evans reduced their deficit to 3 points.
The end to end nature of the game continued and a clever kick ahead by fly half Steadman was gathered by wing Cian Jones who showed a fine turn of pace to sprint clear and stretch the visitors’ lead again.
With seven minutes left, the hosts reduced the lead with a fine try for fly half Lewis who also added the extras. The final minutes were a tense affair with both sides pushing for another score, but when full time arrived the score remained unchanged and Gowerton returned home having claimed the narrowest of wins.
Next up for Gowerton they travel to play Morriston.

Gowerton hosted Gwyr in their second Ospreys West Division 1 fixture. The game was played at Gowerton RFC and despite the heavy rain of recent days the pitch was in excellent condition and a healthy crowd were treated to a fantastic game of rugby between the two Gowerton schools’.
The visitors’ scrum put the hosts’ pack under pressure in the early stages and it took some excellent defensive work from full back Tom Richards and scrum half Tom Davies to prevent an early score.
The hosts had the upper hand in the lineouts and the quality possession from locks Olly Freeman and Sam Terry enabled the Gowerton backline to threaten.
However it was the strong Gwyr scrum that led to the game’s first try when centre Owain Green took a crash ball and offloaded to winger Adam Price who crossed.
With their tails up, and after a spell of pressure they stretched their lead with an unconverted score.
Minutes later an excellent turnover by flanker Ben Cort won possession and following strong runs from forwards Peter Legg-Davies, Jacob Purcell, Vikran Sanghera and Alfie Woodcock, hooker Rhys Flower burrowed over for Gowerton’s opening score. Fly half Paul Packham added the extras.
From the restart, prop Woodcock caught the ball and made good yards, further carries from centres Zac Johns and Isaac Clark saw a ruck set up in midfield. Scrum half Davies took full advantage of a gap on the fringe of the breakdown and sprinted clear from halfway to dot down. Fly half Packham’s conversion gave Gowerton the lead.
The ‘ding-dong’ nature of the game continued when the visitors reclaimed possession 40 metres out after several phases the ball was moved wide and they crossed in the corner.
Gowerton prop Purcell’s name was next on the score sheet when he pounced on a loose ball and scored. Packham again added the extras. The final say of the half though went to the visitors who scored their 4th try of the game giving them a 26-21 advantage at the break.
Gwyr started the second period strongly and Gowerton centre Joe Hawkins-Cole had to be at his best to deny them an early score. Live wire scrum half and Gowerton’s man of the match Davies went on a strong up field run and when he was halted on the 22 flanker Ryan Stagg sniped around the fringe of the ruck and scored an excellent try which Packham again converted.
The lead changed hands again when Gwyr scored their fifth try but Gowerton were not going to go down without a fight and flanker Stagg grabbed his second try when he dived in at the corner. Packham’s impressive touchline conversion put his side back in front with 10 minutes left.
Gwyr’s bench now made the difference and Gowerton conceded a penalty try for not retiring and then another score in the corner. The hosts pressed in the dying minutes for a consolation score but a loose pass was intercepted in Gwyr’s 22 and they sprinted clear for a converted try that left the score 52-35 to the visitors, a final score that didn’t reflect how closely fought the game had been.
Gowerton travel to Brynteg for their next game.