The Delft minis and year 7/8 squads after the game.

Gowerton made the 20 minute bus trip from Rotterdam to Delft for games against the clubs’ minis (under 13s) and Cubs (under 15s).

The minis game was hard fought with Delft possessing strong running forwards and centres, but Gowerton having the advantage in team play.

The first half was end to end. Gowerton opened the scoring in the 6th minute when full back Alex Hughes drove up to the try line. He was tackled just short but flanker and captain Adam Williams was on hand to pick up and drive over. Full back Hughes converted.

Kobe Bowen gets in a bit of heading practice-it’s a good job he’s wearing his scrum cap.

The hosts looked certain to equalise in the 10th minute when centre Tiago Greeve intercepted a stray pass on half way only to be halted by a great last ditch tackle by fly half Gavin Williams.

However, Greeve was not to be denied and he crossed in the 14th minute with a strong run from a close up scrum. Scrum half Hidde Vanbeek added the extras to tie the scores.

Three minutes later Gowerton were back in front when a clever dummy by fly half Williams allowed him to release centre Alex Graham-Woollard on halfway, he had a lot of work to do but beat three defenders before sprinting clear to score beneath the posts. Alex Hughes again converted.

Delft’s stronger forwards were on top in the final 10 minutes of the half and prop Gabe De Goey crossed twice to give them a 17-14 lead at the break.

Gowerton dominated the second period with  scrum half and man of the match Matthew Davies controlling the game intelligently and they crossed for four unanswered tries. In the 36th minute, lock John Edwards broke away in his own half and sprinted clear for a try that full back Hughes converted. Five minutes later, a good run by wing Malin Jones took him just short of the hosts’ line and prop Connor Williams arrived to pick up and drive over.

Looking at Alex and Stuart you can see the impact of a team talk from Mr Mason!!!

Then in the final quarter, a brace of tries by wing Ethan Lee put the ‘icing on the cake’ the first was an arcing 60 metre run before good work by flanker Sam Terry gave Lee the room to sprint in from 20 metres. Fly half Williams added the extras and at the final whistle Gowerton had got their tour off to a winning start. 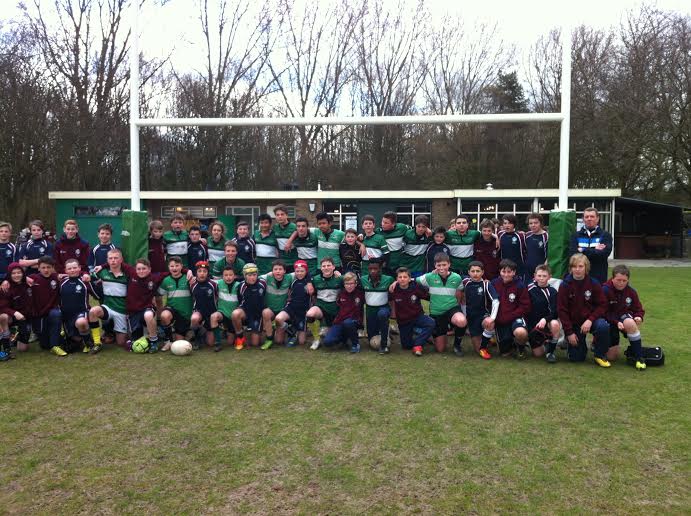 The year 8 and 9 and Delft cubs teams post match.

At kick off it was clear that the hosts possessed a significant physical advantage, but with only 14 players, Gowerton’s Jacob Rees, Jack Griffiths and Rhys Jones all took a turn to play for Delft.

The hosts applied the early pressure, but they were unable to crack Gowerton’s defence with flanker and man of the match Leon Bevan impressive. In the 10th minute the visitors broke the deadlock when centre Jack Cosker sliced through some hesitant defending in his 22 and fed wing Tom Barrington on halfway, he set off on an elusive run that saw him beat 4 defenders before crossing for an unconverted try.

In the 20th minute, it took an excellent tackle by No.8 Lewis Pennington to keep the  visitors’ line intact, but from the resulting scrum No.8 Nathan Van Heerde drove over. Centre Laus Noorman converted.

Olly Bruce looks to get outside his opposite number.

On the stroke of half time, Delft stretched their lead when full back Sam Muntinga crossed in the corner.

Gowerton reduced the deficit in the 33rd minute when strong runs by lock John Edwards, prop Mabon Kaniewski and centre Jack Petherbridge allowed centre Matthew Newcombe to slide over in the corner.

Joel Matuschke is surrounded despite James Hicks being close at hand.

Hosts’ wing Loseth Besamoh then showed real pace to score in the corner, centre Noorman converted. Back came Gowerton when good work by hooker Tom McCann allowed prop Kaniewski to power over. The see-saw nature of the game continued and Delft’s No.8 Van Heerde powered over for his second score before with 5 minutes left the game was very much in the balance when scrum half Jacob Williams dummied his way through from 20 metres and only four points separated the teams.

However, it was the hosts who secured the win with tries from centre Siem Damen and No.8 Van Heerde in the final five minutes and the day ended with honours even.