Gowerton double up against Olchfa. 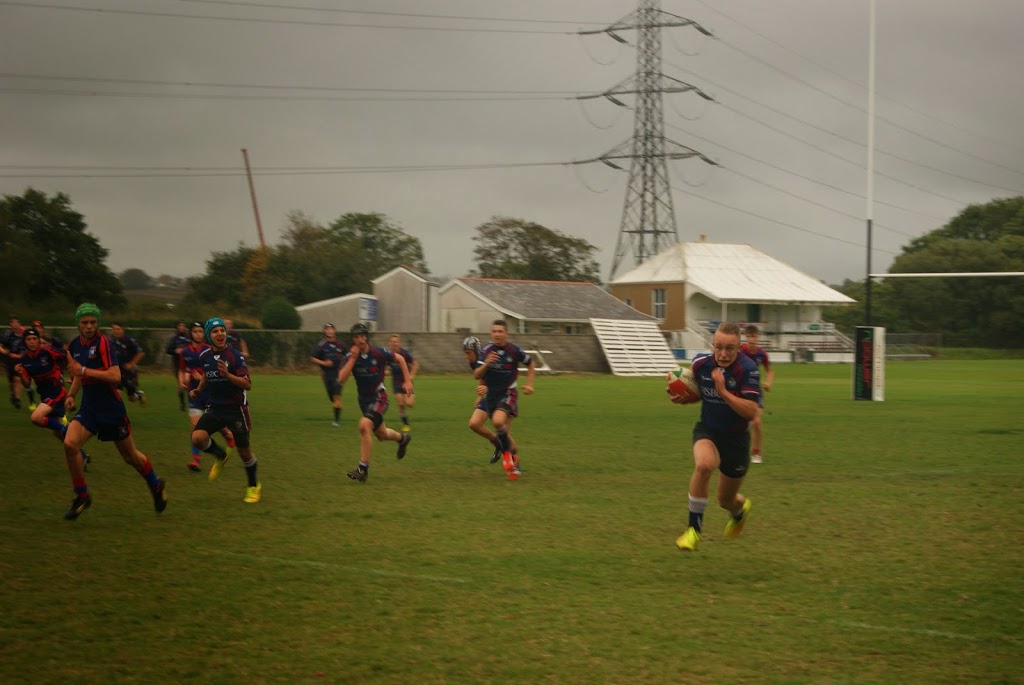 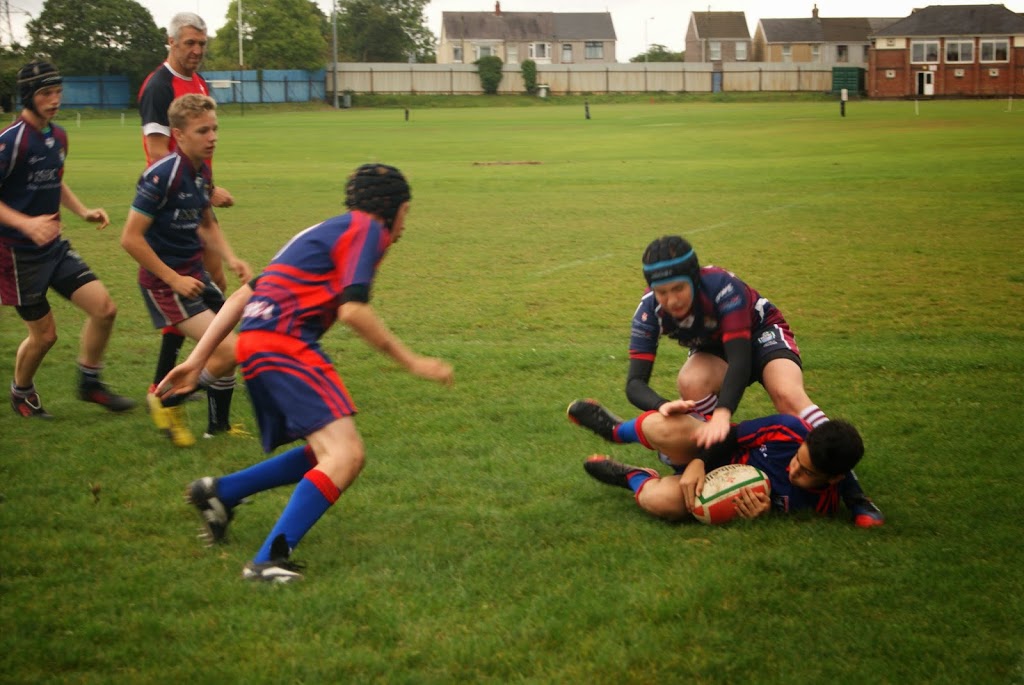 Sean Collins races in for 4 tries to seal a great win for year 10.

Gowerton entertained neighbours Olchfa at Gowerton RFC and emerged with a 33-5 success that was based around the skill of their back row in the contact area and the pace and angles of running of their backs.

The visitors settled first and were on the board in the 3rd minute when wing Ioan Verhoven burst down the blind side of a scrum on the hosts’ 22 to cross for the first try.

Gowerton’s response was immediate, wing Elliott Rees did well to reclaim the kick off. He was halted just short of the visitors try line, but the ball was moved wide from the ruck and captain and fly half Sam Cambriani’s long pass put centre Sean Collins clear to score in the corner. Wing Rees added the excellent touchline conversion to give the hosts the lead.

Sam Nicholson gets in a great position to ‘jackal’ for the ball.

Gowerton increased their lead in the 9th minute, with a try started at a lineout in their own 22. Flanker Joe Bright-Key drove the ball up to their 10 metre line and when it was released to the backs a sublime delayed pass from centre Adam Fielding put centre Collins clear and he sprinted 60 metres for a try that Rees again converted.

Collins completed his hat trick in the 21st minute. Flanker Jack Soproniuk secured a loose ball and this time it was captain Cambriani’s well timed pass that gave the centre the opportunity to show his pace and sprint 50 metres to score. Rees again added the extras.

On the stroke of half time, Gowerton added a fourth try when lock Daniel Sherman won possession and fed wing Rees who showed both his pace and his excellent footwork to beat several would-be tacklers and cross for a try he again converted that gave the hosts a comfortable 28-5 lead at the break. 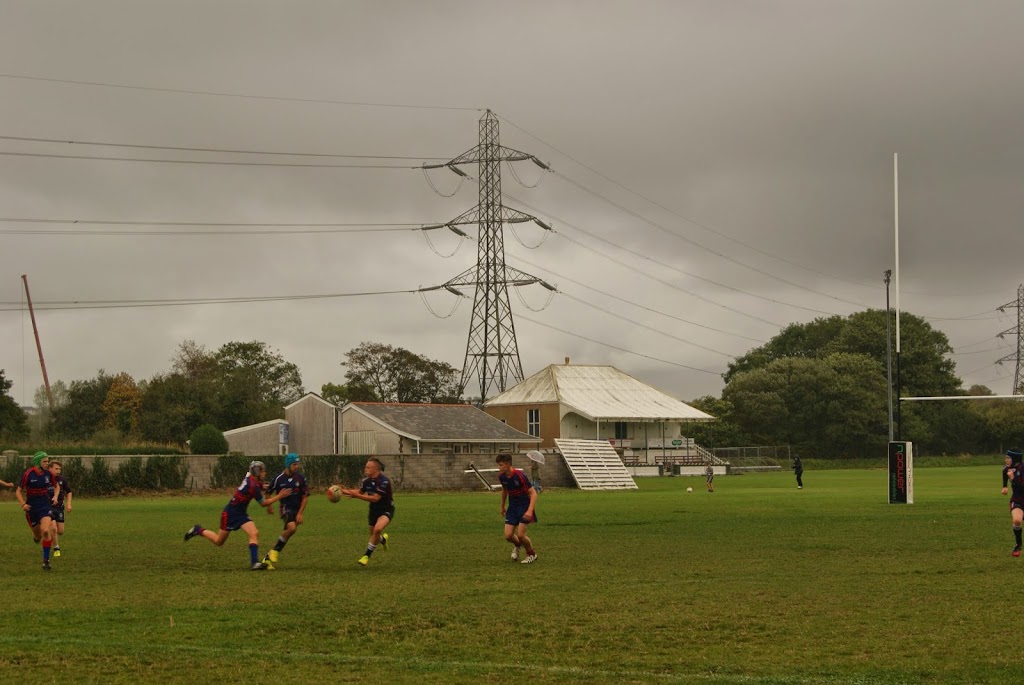 Gowerton extended their lead within 2 minutes of the start of the second half when man of the match Cambriani probed down the short side of a scrum and fed centre Collins. Olchfa again had no answer to his pace.

Olchfa now enjoyed their best spell of the game with No.8 Cameron Lewis a strong ball carrier and flanker Callum Elwyn a tireless worker, but Gowerton’s defence wasn’t going to be breached and they retained their lead at the final whistle.

Gowerton entertained Olchfa at the Elba and with the visitors having achieved two wins over the hosts last season and then gone on to lift the Swansea schools’ Cup at St. Helens, the team knew they faced a tough challenge. However, it was a task the team was committed to and their resilient defence enabled them to come away with a notable victory.

Olchfa were the first to apply pressure and Gowerton spent most of the first quarter camped in their own half, but when the visitors conceded a penalty in Gowerton’s 22, scrum half Jac Simons took the penalty quickly and fed wing Kori Barton. He set up a ruck from which the ball was spun wide and wing Ben Petherbridge showed great pace to run 70 metres to score beneath the posts. Scrum half Simons converted.

The visitors were back on the attack immediately and in the 17th minute, the ball was passed out wide from a scrum and wing Sam Rees crossed for an unconverted try. Gowerton’s defence had been very impressive throughout the 1st half with every player contributing. Props Connor Williams and Ethan Hall worked hard at the rucks, whilst centre Jacob Turatto was very vocal in organising the defence. Man of the match was John Edwards who was everywhere on the field making a number of crucial tackles whilst Olly Bruce was solid at full back, and made several penetrating runs.

In the second half, Olchfa continued to press and after a number of phases they took the lead for the first time when hooker Ben Davies powered over the line beneath the posts, for a converted try. Gowerton continued to try to get the ball to their speedy outside backs and they were back on level terms when they moved the ball wide from a scrum and again Petherbridge, who had now moved to the centre, ran from his own 22 to score a try which went unconverted. Gowerton were now playing with more confidence and from the kick off, they again moved the ball into space and when lock John Edwards received the ball on half way, he brushed off several would be tacklers and scored an unconverted try.

Olchfa pressed until the final whistle, but Gowerton’s defence was unflinching and at full time a very entertaining game of rugby ended with a narrow but deserved victory for the hosts.